The decorative archway at the entrance on Charlevoix at Neff. 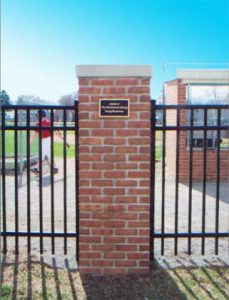 As you can see from the pictures on this page, the pillars of the community project at Elworthy Field along Neff and St. Clair, is a great ongoing Foundation Project.

We worked with the Little League and Babe Ruth Leagues to help beautify the ballparks and play fields by funding the cost of installing decorative iron fencing supported by brick pillars around the entire field.

We also provided the decorative archway at the entrance on Charlevoix at Neff. Funding for this project was provided by generous donors that paid $2,750-$4,000 each. These donors received 2 bronze plaques (one on each side of one pillar) that honored the donor and their family. The funds went to pay for this project and subsequent donations were used to replace the large backstop on the high school sized diamond along Neff.

The donors were generous residents that wanted to express a lifetime connection to Elworthy field. Many of them were families that wanted to recognize their family members who are or were significantly involved in activities at Elworthy. Future donors who purchase a pillar will continue to support ongoing needs for Elworthy that may not be able to be provided by others.